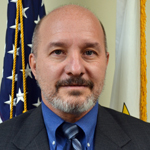 James started his Law Enforcement career in December of 1989.  He worked in patrol from 1989 through 1999. In 2000 he became a Detective.  As a Detective James worked all facets of crimes from disorderly persons to homicide.  In 2008 he was promoted to Detective Sergeant and served as the Detective Bureau Commander.   James was on-loan with local, state and federal tasks forces.  In 2005 James worked on-loan with the Bergen County Prosecutor’s Office working child sexual assaults and child pornography investigations. In 2009 James was back in patrol as a tour commander until September of 2010 when he was promoted to Acting Captain.  In January of 2011 James was promoted to Captain.  He became executive officer of his department.  James was responsible for Internal Affairs, payroll, scheduling, pensions, benefits, budgeting, purchasing and the fleet and continued on loan with the BCPO. James holds an Undergraduate Degree in Criminal Justice from New Jersey City University, he holds a Master’s Degree in Administration from FDU along with Master’s Certificates in Law and Public Safety and Computer Forensics and Safety.  James is enrolled at Rutgers University School of Management and Labor Relations and taking a certification course in Public Sector Labor Relations.