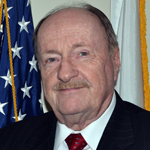 Ron began his career in the Camden police Department and transferred to Gloucester Township in 1976. During his tenure as a patrolman and detective, Ron received numerous awards, accolades and recognition for his work and efforts. Additionally, in 1976, Ron served on the contract committee which negotiated the first collective negotiations agreement in Gloucester Township. He remained on the negotiations committee until his retirement.  In 1998 Ron began working as a founding member of the Fop-NJ Labor Council as a staff representative and support staff for the office located in Trenton.  Ron’s experience and dogged determination, coupled with his vast knowledge quickly became the cornerstone for staff representatives. Ron was asked and appointed to the position of Executive Director in 2000 and served with distinction until 2010. Ron continues to serve his brother and sister members as staff representative, bringing his unparalleled knowledge and experience in labor advocacy. On the local level Ron has served in all facets of leadership in his local lodge including as President of Lodge 9.  At the State level Ron has served on numerous committees including Legislation, Education, Labor and Expansion. Ron helped build our annual labor convention into the premier training for law enforcement labor in New Jersey. Has also advocated for numerous protections legislatively and ensured our members have had their voices heard in Trenton. He has been an advocate for the growth of the FOP in New Jersey, chartering dozens of new lodges and working with our members to ensure they have all the resources available to advocate and represent their membership. Nationally, Ron served over 20 years as the National Trustee for New Jersey. Ron has served on various National Committees, including expansion and labor. Ron’s determination and experience has been heard by our elected representative in Washington, as he has ensured our members rights are protected and voices have been heard.