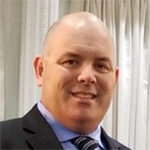 Sean began his law enforcement career in juvenile and adult corrections. In 2000, Sean was hired by the Mercer County Sheriff’s Office and attended the 87th basic recruit class at the Trenton Police Academy. Sean was assigned to various units as a Sheriff’s Officer including patrol, courts, detective and the Sheriff’s Emergency Response Team. In 2001 Sean and his co-workers, Mike Vasil and Christina Kalm, founded the non-profit organization, “Officer Down” in response to the death of co-worker Kevin McManimon. In 2005 Sean was recognized as Sheriff’s Officer of the Year by his co-workers. He served in New Orleans as part of Operation LEAD during Hurricane Katrina. In 2006 Sean was promoted to Sergeant and served in the Operations, Courts, OEM and Airport Units. Sean also served as the Health Department liaison constructing security planning for mass epidemic/bio terror response and on Chief Justice Rabner’s Court Security Committee helping to restructure the court security protocols in the NJ Superior Courts.  As a union leader Sean has held positions in Lodge 140 continuously since 2006, including Secretary, Vice President, Trustee and is currently the President of Lodge 140. As a union member and leader, Sean and his brothers and sisters successfully advocated and won forty-eight (48) grievances and four (4) unfair practice charges, as well as, negotiating successor contracts.  In 2013 Sean was elected to the Executive Board of the Fraternal Order of Police – New Jersey Labor Council and served as the executive Chairman until 2014. Sean retired in 2015 due to several severe knee injuries received in the line of duty. Sean has a Bachelor’s and Master’s Degree of Administration from Fairleigh Dickinson University. Sean has a certificate in Public Sector Labor Relations from Rutgers University. In 2018 he attended and completed the Negotiations and Leadership certificate program at Harvard Law School.